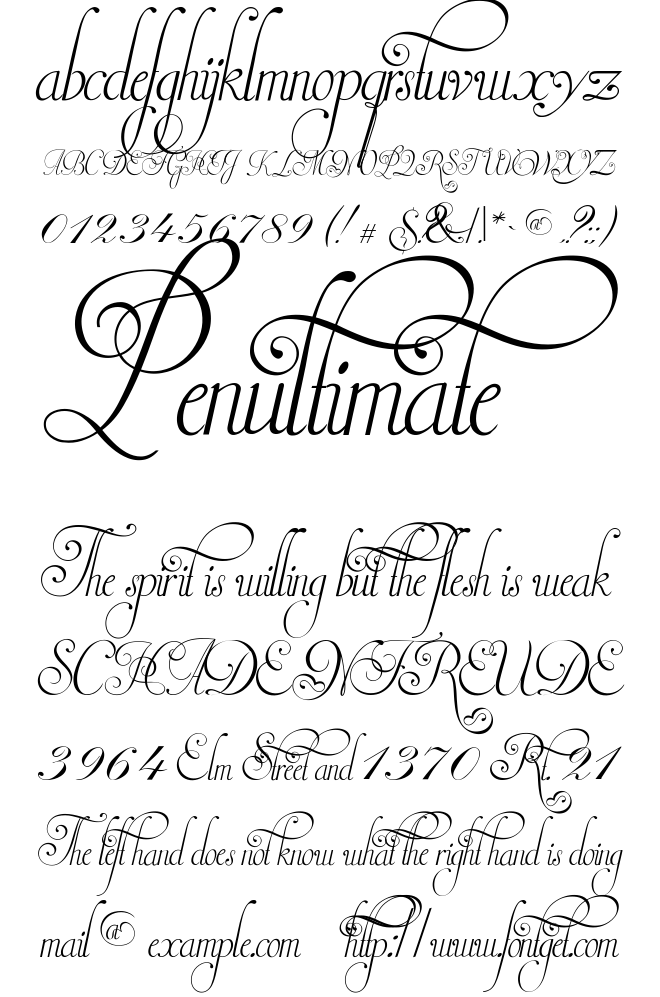 Free for Personal Use
Free for Commercial Use
Invitation Script Limited Free Version, by Intellecta Design

The original font has over 1100 letters, besides other four fonts in the family. To purchase the complete Invitation Script family and commercial licences, please, visit:
http://www.myfonts.com/fonts/intellecta/invitation-script/buy.html

INTELLECTA DESIGN makes research and development of fonts with historical and artistical relevant forms. This font is a FREE software for personal and non-commercial use only. But donations for my HISTORICAL STUDIES about the history of the letters, calligraphy and typography are accepted. This font is for unlimited distribution, since attached in a file zip together with this text. For commercial use (of this limited version only) you need register this software by sending U$ 15,00 to the following paypal account - estiliza@gmail.com - After that, you need sent me a e-mail (paulo.w.designer@gmail.com), so I will send to you a legal permission to use the font.

ABOUT THE ORIGINAL FONT

Iza W and Intellecta Design are proud to announce Invitation Script, a modern and clean revival of the classic work of the Portuguese master penman

Invitation started out from Andrade's script style and evolved into a voluptuous script font family. The result is a typeface ideal for
beautiful headings, signatures, art work typography, titles and short pieces of hand-lettered text. Invitation family includes two multi-table Opentype
fonts, three supplementary fonts for ornaments and fleurons, and the Archaic font with some of the Andrade's original characters.
Embedded in the regular fonts are additional sets of letters. Over 40 variations are available for certain letters via the Special Sets Opentype table.
The two regular versionss of Invitation Script contains the following:

(i) An extensive set of ligatures providing letterform variations that make eye-popping designs or simulate real handwriting. These are accessible via
contextual alternates and other open-type features.

(ii) Many stylistic alternates for each letter (upper and lowercase, accessed via the glyph palette, encoded in the ranges of the Special Set Opentype feature).
Since there are over 1100 glyphs in each font, we suggest using the glyph palette.

(iii) A set of ornaments and fleurons accessed with the glyph palette or using the Ornaments feature. Additional ornaments can be found in the two
Invitation Script Ornaments fonts.

(v) Major kerning work: over 6000 kerning pairs, hand-set to avoid collisions and to create intricate combinations of letters, using swashes and other
resources.

These powerful features are all accessible in InDesign, Illustrator, QuarkXpress and similar software. We recommend exploring the magic of this
font using the glyph palette. Our sample illustrations and PDF brochures showcase the power and pizzazz
of this calligraphic script. Let your imagination go wild and use Invitation Script in ways that Andrade could not have foreseen.
In non-OpenType-savvy applications, Invitation Script is still an exceptionally beautiful calligraphic typeface that stands up to the competition.
The regular fonts contains the complete Latin alphabet, including Central European, Vietnamese, Baltic and Turkish, with a full set of diacritics and
punctuation marks.

Engraved royal coat of arms supported by angels over the city of Lisbon, engraved portrait of the
author (both of the foregoing by Bernard Picart), (12)ff., 156pp., engraved calligraphic section title, 44


1721 and is showing Figueiredo at the age of 48. He was an eminent calligrapher and a creator of the

Italian masters in its use of clubbed ascenders and descenders, and of Diaz Morante, the famous
Spanish writing master, in its very elaborate show of command of hand. By his contemporaries, he